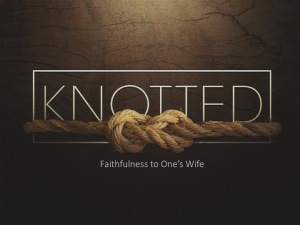 I was reading to our youth group the other evening from the Gospel of Matthew when Paul’s letter to the Ephesians fell out of my Bible onto the floor. A few moments later the 1 John through Revelations hit the ground.

The Bible I had been reading, highlighting, and marking for the past decade succumbed to the wear and tear. While I was a little sad, honestly, to “call it” for Bible, I was also a little excited about the prospect of getting a new unmarked Bible. I think I might be at a point in my spiritual life where I am hungry to read the scriptures with fresh eyes.

My new Bible arrived this past Friday and this morning I opened the still crisp pages to read the scriptures with a pencil (always a No. 2 Black Ticonderoga) in hand. Excited to discover the truth revealed in the pages of this magnificent and living book once more.

I began reading the first chapter of Genesis. After a few verses, I thought: “I always start at the beginning. Maybe I should read the two testaments in reverse…just to shake it up…”

I turned to the Book of Malachi and, once more, I began reading.

I was not looking for anything specific by turning to this Malachi. I was just looking for a good place to enter back into the story of God…

The book is short (there are only four chapters), but this brief oracle hits upon some seriously taboo topics. As specified by the prophet, “Ever since the days of your ancestors you have turned aside from my statutes and have not kept them.” (3:7a) Malachi speaks to the waywardness of the people Israel with the hope of encouraging them to “return to [the Lord] and [the Lord] will return to you…” (3:7b)

Malachi identifies some of the ways in which the people of God had turned aside from the statutes of the Lord. He speaks to the faulty instruction of the Priests; adultery and divorce; improper tithing; “polluted” sacrificing; and, harsh speech against God among other things. At one point, Malachi speaks frankly about the failure of the people of God.

Yeah, there are certainly a few taboo subjects tucked securely into that one little verse: oppression of hired workers in their wages; thrusting aside the alien. But, I will refrain from adding my two cents on some of those issues.

Another section of the book caught my attention – The implied directive for husband to remain faithful to the wife of his youth.

Malachi begins his address of a husband’s faithlessness with a sobering image. He declares the faithlessness of these husbands have caused the altar of the Lord to be covered with tears.

And this you do as well: You cover the Lord’s altar with tears, with weeping and groaning because he no longer regards the offerings or accepts it with favor at your hand. (2:13)

The cause of the tears and weeping falls to the faithlessness of husbands who have not kept to the wives of their youth.

Because the Lord was a witness between you and the wife of your youth, to whom you have you have been faithless, though she is your companion and your wife by covenant. Did God not make her? (2:14-15a)

Did God not make her?

Wow! That strikes at the heart.

Here is the thing: Desire draws the eyes of man away from himself. This desire is the seed of his faithlessness. He looks outward to see the temptation before him. In another sense, however, looking outward is a redirection of his heart.

One might argue our passions are inward looking because they are self-serving. There is truth to that thought; but, let’s think along a different line.

A man and wife are knotted in marriage. Two become one through the unbreakable bond established within the covenant of marriage. Serving our passions is not merely self-serving; rather, it is something different. The self is no more through the covenant of marriage. The self becomes something new and different. And, ideally, through this knotting of two, the one becomes something stronger. To serve the good of self ought to mean to serve the good and the betterment the one formed from the knotting of two.

Malachi chimes in with an instruction to the faithless husband. He declares,”So look to yourselves, and do not let anyone be faithless to the wife of his youth.” Look to your true self – the self God formed when you and your wife entered into the covenant of marriage.

You know the saying, “There is nothing wrong with looking!”

Did God not make her?

Look to yourself and see the wife to whom God formed.

Look to your self and live committed to the self God knotted between you and your wife.

The Blog of Philosopher Steven Colborne

My thoughts as I journey through this thing called life.

Rebelling against a culture that values assimilation over individuality.

FaithMatters: Reflections on Life and Faith

Random Bits of Trial and Error

THE JOYS OF FULL-TIME RV LIFE - Random, moody, and quirky--but always straight from the heart.

The Life of a Not So Ordinary College Girl